The objective of this project is to represent factual claims in a structural way, where various aspects of such claims, including the entities involved and their relationships, quantities, points and intervals in time, comparisons, and aggregate structures, can be captured. With such a modeling capability in place, fact-check assisting tools can exploit the idiosyncrasies of different forms of factual claims. For instance, in translating claims into verification queries over knowledge bases, query templates can be carefully crafted beforehand for different types of claims, and methods can be designed to replace the variables in the query templates by entities and elements from the structured representations.

Our approach is to extend the Berkeley FrameNet project, a lexical resource for English built on a theory of meaning called frame semantics. In frame semantics, lexical units (LUs, i.e., words, phrases, and linguistic patterns) evoke frames. A frame describes a type of event, action, situation, or relation, together with frame elements (FEs). Frame elements are frame-specific semantic roles that provide additional information to the semantic structure of a sentence. We created 20 factual-claim specific frames, including 11 new frames and nine existing ones from FrameNet to represent claims in a structured format. Table 1 shows a new frame---Vote created for characterizing claims about someone's voting decision towards an issue. Agent and Issue are two of the frame elements. Agent, a conscious entity, holds a positive or negative opinion about an Issue and votes on it. The lexical units of the Vote frame are vote and (a/the) deciding vote.n in the verb and noun forms, respectively. 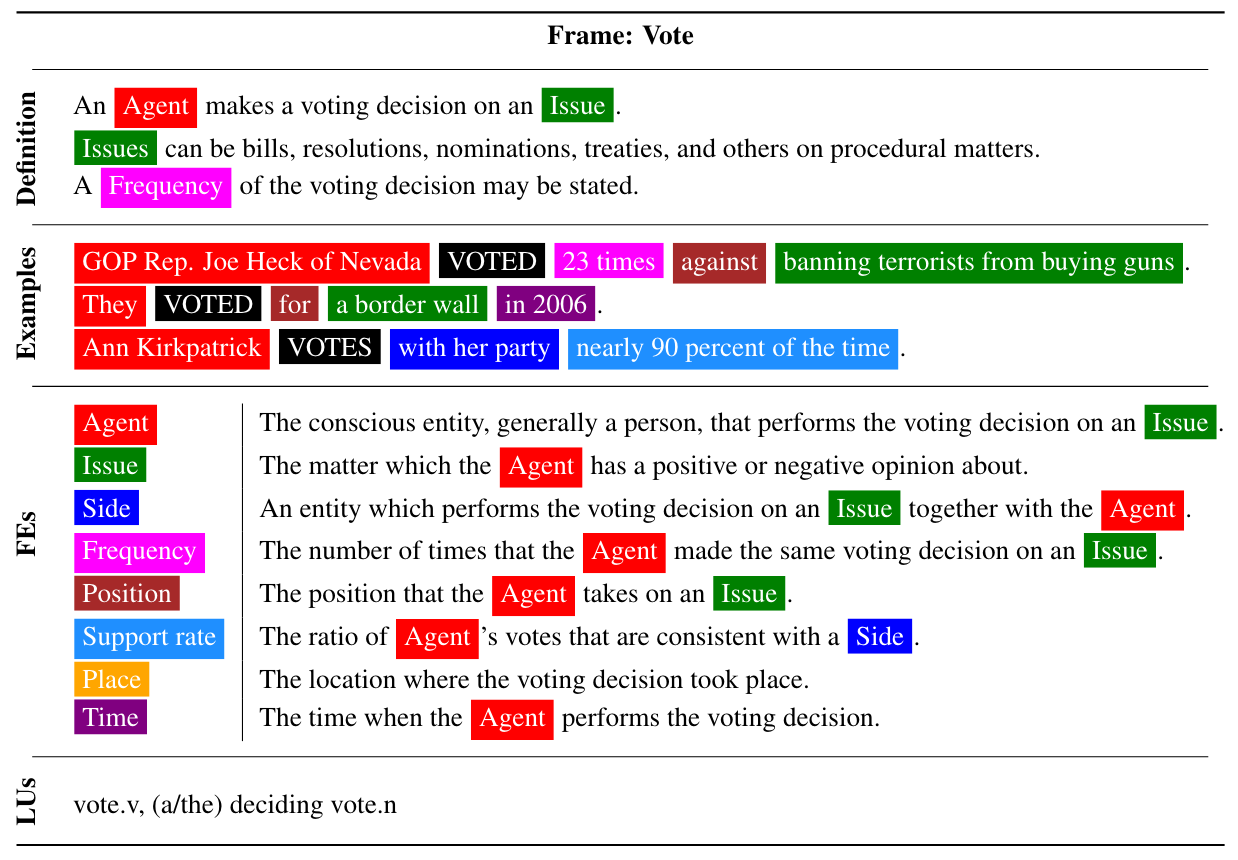 We created the following 11 frames to model factual claims.

This material is based upon work partially supported by the National Science Foundation Grants 1937143, 1719054, and sub-awards from Duke University as part of a grant to the Duke Tech & Check Cooperative from the Knight Foundation and Facebook. Any opinions, findings, and conclusions or recommendations expressed in this material are those of the authors and do not necessarily reflect the views of the funding agencies.