This is the first study on crowdsourcing Pareto-optimal object finding, which has applications in public opinion collection, group decision making, and information exploration. Departing from prior studies on crowdsourcing skyline and ranking queries, it considers the case where objects do not have explicit attributes and preference relations on objects are strict partial orders. The partial orders are derived by aggregating crowdsourcers’ responses to pairwise comparison questions. The goal is to find all Pareto-optimal objects by the fewest possible questions. It employs an iterative question selection framework. Guided by the principle of eagerly identifying non-Pareto optimal objects, the framework only chooses candidate questions which must satisfy three conditions. This design is both sufficient and efficient, as it is proven to find a short terminal question sequence. The framework is further steered by two ideas— macro-ordering and micro-ordering. By different micro-ordering heuristics, the framework is instantiated into several algorithms with varying power in pruning questions. Experiment results using both real crowdsourcing marketplace and simulations exhibited not only orders of magnitude reductions in questions when compared with a brute-force approach, but also close-to-optimal performance from the most efficient instantiation. 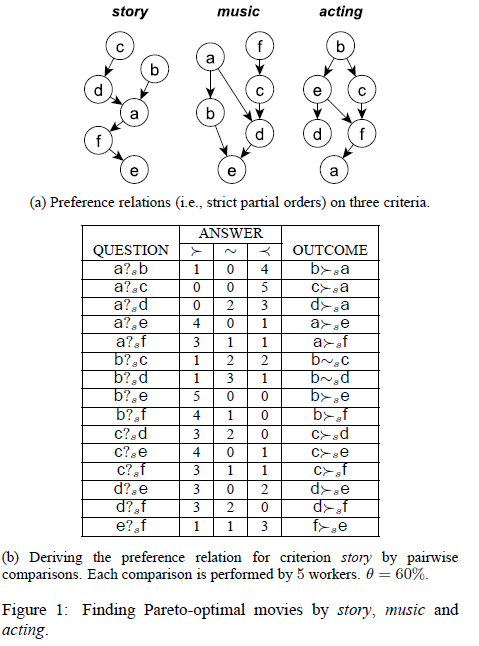 Consider a set of objects O and a set of criteria C for comparing the objects. An object x∈O is Pareto-optimal if and only if x is not dominated by any other object, i.e., ∄y∈O such that y≻x. An object y dominates x (denoted y≻x) if and only if x is not better than y by any criterion and y is better than x by at least one criterion, i.e., ∀c∈C : x ⊁c y and ∃c∈C : y ≻c x. If x and y do not dominate each other (i.e., x⊁y and y⊁x), we denote it by x∼y. The preference (better-than) relation Pc (also denoted ≻c) for each c∈C is a binary relation subsumed by O×O, in which a tuple (x, y)∈Pc (also denoted x ≻c y) is interpreted as “x is better than (preferred over) y with regard to criterion c”. Hence, if (x, y)/∈Pc (also denoted x ⊁c y), x is not better than y by criterion c. We say x and y are indifferent regarding c (denoted x ∼c y), if (x, y)/∈Pc ∧ (y, x)/∈Pc. We consider the setting where each Pc is a strict partial order as opposed to a bucket order [1] or a total order, i.e., Pc is irreflexive (∀x : (x, x) /∈ Pc) and transitive (∀x, y : (x, y)∈Pc ∧ (y, z)∈Pc ⇒ (x, z)∈Pc), which together imply asymmetry (∀x, y : (x, y)∈Pc ⇒ (y, x)/∈Pc). We note that such definition of better-than relation has been widely used in modeling preferences (e.g., [10, 2, 5]). Pareto-optimal object finding lends itself to applications in several areas, including public opinion collection, group decision making, and information exploration, exemplified by the following motivating examples.